Many of you who have played WoW (World of Warcraft) in it’s 13 year long reign as king of MMOs will recognise this guy. I have been have a Wownaissance recently in poring through fan art of other artists and really enjoying it. So I wanted to add my own. You will likely have already seen my blog posts about the Orc Warrior I painted and the Undead Warlock too. This is the Troll Hunter. 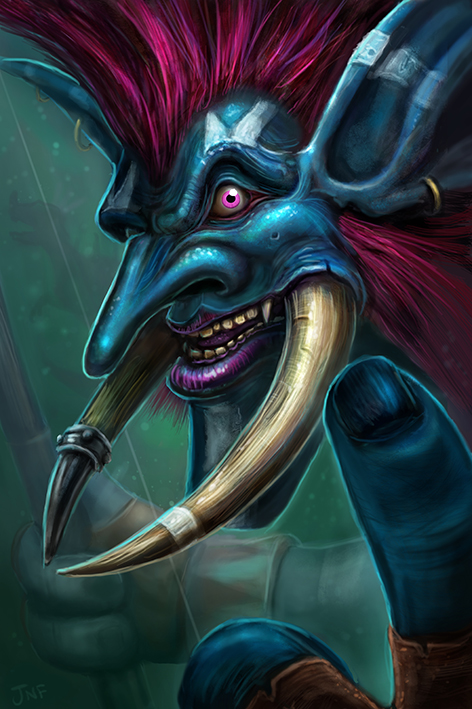 This was a really good piece in working out form for me. I went really wayward during a few moments in the early stages. I think these pieces have helped me get to grips with detail vs form, both the Undead and the Orc character had a lot more gritty detail. Whereas I’ve always seen the trolls as a bit more smooth and rubbery! I liked the far arm in the rear ground, it gave what was a very in-your-face piece so nice depth.

Carry on my Wayward Son

As I mentioned before, I had some pretty hairy moments with this one. I think I was quite over-confident after the first too. Confidence for me (during painting) is a real boon. If I’m on a high I’ll really excel, if I’m uncertain- sometimes with client work in particular if we’re not quite on the same page, my art with smack of nerves.

With this one, once I started to deflate (confidence-wise) I could really see it going south. I stopped and started and flipped this one more than the other two put together. 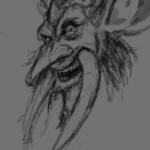 I really like the first sketch, I felt like it had the right vibe, but as I began to flesh it out, it really deviated from the Warcraft vibe. So I really got stuck in with pulling it around with Liquify and lasso tools before painting over it again. I’m glad I did as I was quite close to binning the project at one point!

It’s all about carrying on sometimes. However, sometimes it’s just better to “Kill your darlings”. I think I’ll write about that too next time I decide a project has gone off the rails!